United vs Madrid: 5 Reasons why Ferguson will beat Mourinho 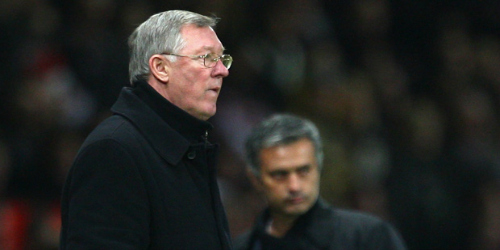 When Manchester United and Real Madrid were drawn against each other in the last 16 of the Champions League, tabloid journos no doubt would have been licking their lips at the prospect of Cristiano Ronaldo locking horns with his former teammates and Jose Mourinho doing another school playground jig down the Old Trafford touch-line come while the rest of us YouTubed that Ronaldo hat-trick and that Redondo skill that bamboozled Henning Berg.

Mourinho like Pep Guardiola continues to be touted as a potential candidate to succeed Sir Alex once he decides to toss the chewing gum away one last time and as the Madrid manager endures one of the tougher periods of his reign at Los Blancos, progressing to the quarter-finals stage of the competition could go some way to make up for a season that is danger of ending in disappointment.

Heading into 2013 Ferguson’s United side sit at the top of the table with a significant points cushion separating them from their noisy neighbours with plenty of cutting edge up front to help mask some of the defensive concerns at the back. In what will be United’s biggest test in the Champions League so far this season, here’s five reasons why United could come out on top against Mourinho’s Madrid.

Real Madrid’s ferocious, breakneck speed counter-attacking style was a joy to watch last season, but this devastating brand of football has lacked its usual fluency this season. The frightening pace of Cristiano Ronaldo, Angel Di Maria, Marcelo and Benzema are crucial components to the overall effectiveness in which Madrid punishes teams on the counter, and while Ronaldo still remains Madrid’s greatest attacking threat by some distance, Di Maria and Benzema’s form has been indifferent while the Brazilian left back has been sidelined with injury. Marcelo could be back in time for the United tie, but Ferguson will be hoping that the mobility and work rate of Tom Cleverley will help stem Madrid from initiating counter attacks from central areas as they often do while Valencia and Young will be tasked to provide cover when Madrid try to go out wide.

Looking back to Real Madrid’s away defeat to Borussia Dortmund in the group stages, key to Jurgen Klopp’s side getting all three points was the way in which they pressed Madrid in the centre of the pitch and particularly Michael Essien who was filling in at right back. Madrid imposed the same ‘Barca’ style pressing style excellently last season but the willingness to close down the opposition doesn’t seem to have the same intensity as it once did. Ferguson is likely to approach the first leg cautiously but in the return leg there are few better sides that will put the likes of Xavi Alonso and a shaky defence under pressure for ninety minutes when in possession and if they can apply similar pressure without the ball  they could overrun Mourinho’s side.

The tale of two dodgy defences

Both sides have had their fair share of problems at the back leaking goals from set-piece situations, but with Ferguson welcoming back Nemanja Vidic, Chris Smalling and Phil Jones, United already show signs of commanding more discplined displays in defence. After former United striker Manucho exposed Madrid’s defensive frailties with ease in recent weeks and Madrid players like Jose Callejon publicly revealed frustrations about Madrid’s soft centre, question marks will be asked not only of Ramos and Pepe’s concentration levels but also of the issues in both full back positions.

Mourinho has had several different players including Michael Essien and Callejon fill in at right back while the loss of Marcelo has clearly affected the attacking fluency down the left. Chris Smalling continues to impress at right back while Patrice Evra looks a reinvigorated player since the acquisition of Alexander Buttner. If the same uncertainty remains either side of the two centre backs the likes of Young and Valencia could have plenty of joy out wide.

After romping away in La Liga glory with a record 100 points, Madrid are currently 14 points adrift of league leaders Barcelona and even Mourinho himself believes it is ‘almost impossible’ to catch Tito Vilanova’s side who look unlikely to drop many points between now and the end of the season. Madrid welcome Barcelona to the Bernabeu just two days before the return leg at Old Trafford and while most managers would consider resting players, this is El Clasico, and irrespective of the distance likely to still exist between the two clubs in the points column, Mourinho knows will know that he cannot afford to treat a game of this magnitude against Madrid’s rivals lightly if he wants to keep the supporters firmly on his side.

Even to the neutrals the reported disharmony in the Real Madrid ranks Celta Vigo coach Paco Herrera recently made reference to appear to be having some effect on performances on the pitch.  Sergio Ramos was dropped from the Champions League group game against Manchester City earlier in the season while Iker Casillas was left out of the starting eleven in the 3-2 defeat to Malaga before the Christmas break. Just like Raul and Guti were commanding voices in Madrid dressing rooms of the past, Strained relationships between certain players and the manager could be surfacing once again under Mourinho and the unsettled environment appears to be creating a side that lacks the same hunger that fuelled the team to win the league in such spectacular style and could ultimately strengthen Ferguson’s hand going into the two-legged tie.